Hi, my name is Toxu. I am 5 year old Rottweiler. I am originally from Argentina but now living in LA. My family and I moved here 2 weeks ago. We live in a Motorhome. It is like a big bus where everybody has their own rooms; we have a kitchen and a bathroom too. I don´t have my own room but I get to travel behind the driver´s seat were I have my blue comfortable mattress. I very much love my new home on wheels.

Every couple of days I wake up in a different place, with new people, new smells and new landscapes. The other day for instance, I woke up to the sound of a bird I never heard before. Because of the lack of noises I knew it was early in the morning. Someone opened the door and I could feel a salty smell in the air. I jumped out and saw, not far from where we had parked, the beach. I instantly began to run towards the waves that where bouncing against the coast…and of course, my family followed me. They screamed “Toxu volvé” (“Toxu come back” in Spanish) but I was too excited to even listen. The feeling of water between my legs was indescribable.

When my family finally caught up with me I thought they were mad because I ran away without my muzzle and leash. Instead they began to laugh and throw water at each other and at me too. We had the most perfect day!! Sure I miss my home back in Rosario but now it is time for new adventures.

The first time I heard we were moving I got a little sad and scared. Everybody was so anxious! My family moved there first for “house hunting” and left me with my uncle, few blocks away from where we used to live. I was very happy to get the chance to spend some quality time. Every morning he would take me for a long walk in the neighborhood. I really enjoyed taking those walks, walking along the neighbors houses, everybody would say hello when they passed by…they all new my name. He also always saved some “asado”  when he got together with his friends. It was just wonderful.

One day a man in a white van came all the way from Buenos Aires to pick me up. He was a very nice man. He got me into the back of the van and there it was: my own special custom made wooden crate. My owner had told me I was going to get one of those when moving to the US but I didn´t know it was such a big one. I remember her measuring me according to a file that was sent to her from the moving company so this people would get me a crate in which I could fit comfortably. I also remember her having a phone conversation and telling whoever was on the other side that I was a very well behaved calm and nice dog but somehow many airlines consider me “dangerous breed” and my crate had to be reinforced.

I jumped into the van. Though excited I was a little reluctant to get into my crate but the nice man pet me and I knew it was ok to get in. We drove about 250 km when we finally reached the boarding where I was staying until my certificates to get into the US were ready. It was a like a farm with lots of trees and bushes and lots of other dogs. Are they all traveling to LAX? I thought..

Turns out there were dogs from all over to world and moving to different countries. I had a blast while I stayed there. People there toke good care of us, fed us, gave us water and let us play in special pools that were there for us to use whenever we wanted. Since it was so hot we used them a lot.

One week later it was time to leave. So I said goodbye to my new friends and the nice man in the green van got me into my special box again and took me to the airport. When we arrived there I got a bit scared. Were that noises normal? The nice man got out of the van and disappeared for a while with some papers in his hand. After half an hour maybe he came back. He wasn’t nervous at all so I thought these noises at airports were normal. And then I remembered that is was the same noise when I saw the planes flying over our house but louder because we were closer.

He got me out of my crate and took me for a long walk. When I heard a loud noise I kind of shook up. He would pet me and I knew everything was OK. Suddenly someone called him on his handy and as he put me in my box again I knew I was one step closer to getting to my family. He took me into a sort of warehouse were 2 people were standing. One of them check the papers the nice man had in his hand and the other man took me out of the crate, measured me and then check my crate. They told him everything was OK. The nice man looked at me, touched my head softly and smiled at me. This was his way to say goodbye.

The nice man and the other 2 people left. I was left alone in the warehouse. Usually I don’t like to be alone but these last few days had been so exciting that I was exhausted so I decided to sleep a bit. The sound of a machine and two people woke me up. I was getting transferred to the big plane. My heart pounded of excitement; I would soon see my family again!

Posted in Pet Relocation from Argentina 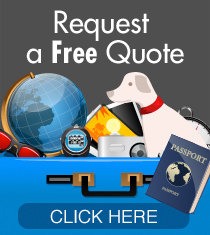 Let us transport your pet safely within Latin American. Click on any of the cities below to learn more:

Puppies and kittens are being offered to people by companies that claim to be our company (or one of many legitimate pet shipping companies). Very often these puppies and kittens do not exist. When purchasing a puppy or kitten, please make sure that you are dealing with a legitimate company.